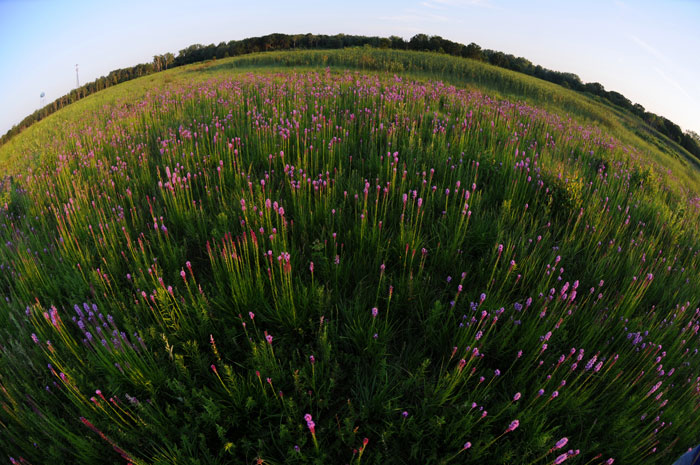 When Critical Connections Ecological Services, Inc. (CCES) initially detected, surveyed, and inventoried the Blaine Preserve site in August of 1999, the site was immediately recognized as one of the highest quality rich fen/wet prairie community remnants remaining on the Anoka Sand Plain. During the initial botanical inventory, CCES documented the presence of several rare plant species including Polygala cruciata, Xyris torta, Viola lanceolata as well as others. More detailed surveys of the site were developed between the years of 2000-2005. By 2005, CCES had documented more than 200 native plant species, including new species to the State of Minnesota. CCES was retained by a developer Brad Moen of Moen Management, LLC to assist with environmental/wetland related permitting and site design of a commercial development that had the potential to impact the highly unique and rare wetlands on the site. CCES worked with the developer, City of Blaine, MnDNR, Rice Creek Watershed District, and the Minnesota Board of Water and Soil Resources to create a groundbreaking plan to develop a portion of the 160 acre site while avoiding impacts to high and moderate quality areas of the site. CCES recommended that the developer utilize the Exceptional Natural Resources Value (ENRV) provision of the WCA in order to make the proposed development economically feasible as well as a permitable project.

The use of ENRV allowed the developer to generate new wetland banking credits through restoration of the ecologically significant existing wetlands. The restored wetlands served as mitigation for wetland impacts associated with the development footprint of the project, and produced excess credits that were banked and sold in the state wetland bank. The restoration and monitoring approach were planned and implemented by CCES. Restoration activities included clearing of undesirable woody species, prescribed burning, limited herbicide application, and local ecotype seed collection and dispersal.

From 2006-2012, CCES resurveyed the site each year to assess and monitor the floristic response to the prescribed restoration and management activities. Annual monitoring revealed that implemented activities were successful and 200 species originally documented on the site was expanded to more than 300 native species with a limited presence of non-native or invasive species.

This project represents one of the first and only successful implementations of the ENRV provisions of the Minnesota WCA. In 2012, the MN DNR took ownership of the property as a State Scientific & Natural Area (SNA). SNA’s are only established in areas where natural features and rare resources of exceptional scientific and educational value can be preserved.